In January of 2007, the Michigan Public Service Commission (MPSC) issued a report with the title "Michigan's 21st Century Electric Energy Plan." This report is still (in January 2015) available on their website at http://www.dleg.state.mi.us/mpsc/electric/capacity/energyplan/index.htm. In it, they predict that demand for grid electricity in Michigan should grow at an average rate of 1.3% per year from 2006 through 2025.

The actual pattern of Michigan's electrical demand from 2000 through 2007 was a growth trend, though not a smooth one. Some years were down; some, up. If the numbers are plotted on a graph, the trend for this period is clearly up. The MPSC prediction of continued growth was simply a projection of the recent trend into the near future. However, the financial crisis of 2008 broke a lot of trends, including that for Michigan's electrical demand.

In the year following the MPSC study, DTE Energy proposed to build Fermi 3, a new nuclear reactor to be located adjacent to their existing Fermi 2 reactor. Their original schedule called for Fermi 3 to be producing power by 2025. In their Draft Environmental Impact Statement (EIS), they relied on the 2007 MPSC projection for future electrical demand. They said that, by 2025, the generating capacity of Fermi 3 would be needed to meet that demand.

Gross divergence between actual demand and MPSC projected demand was pointed out in public comments on the Draft EIS. In the final EIS, it was admitted that the MPSC study was not an accurate prediction. However, DTE Energy argued that the general idea of increased demand was still valid because demand could still reasonably be expected to increase in the region. This supposed validation is just nonsense.

We have data, supplied by the federal Energy Information Administration (EIA), not just for the region but for the entire United States. Demand for electricity in the entire country followed the same pattern as described for Michigan. There was a trend of growth from 2000 through 2007; a decline in 2008, a sharp dip for 2009, a recovery to less than the 2007 peak in 2010, and flat plus or minus 1% of the average value through 2013. The sharp decline for 2009 was a bit more than 4% for the country as a whole, not so severe as Michigan's 7-1/2% decline. 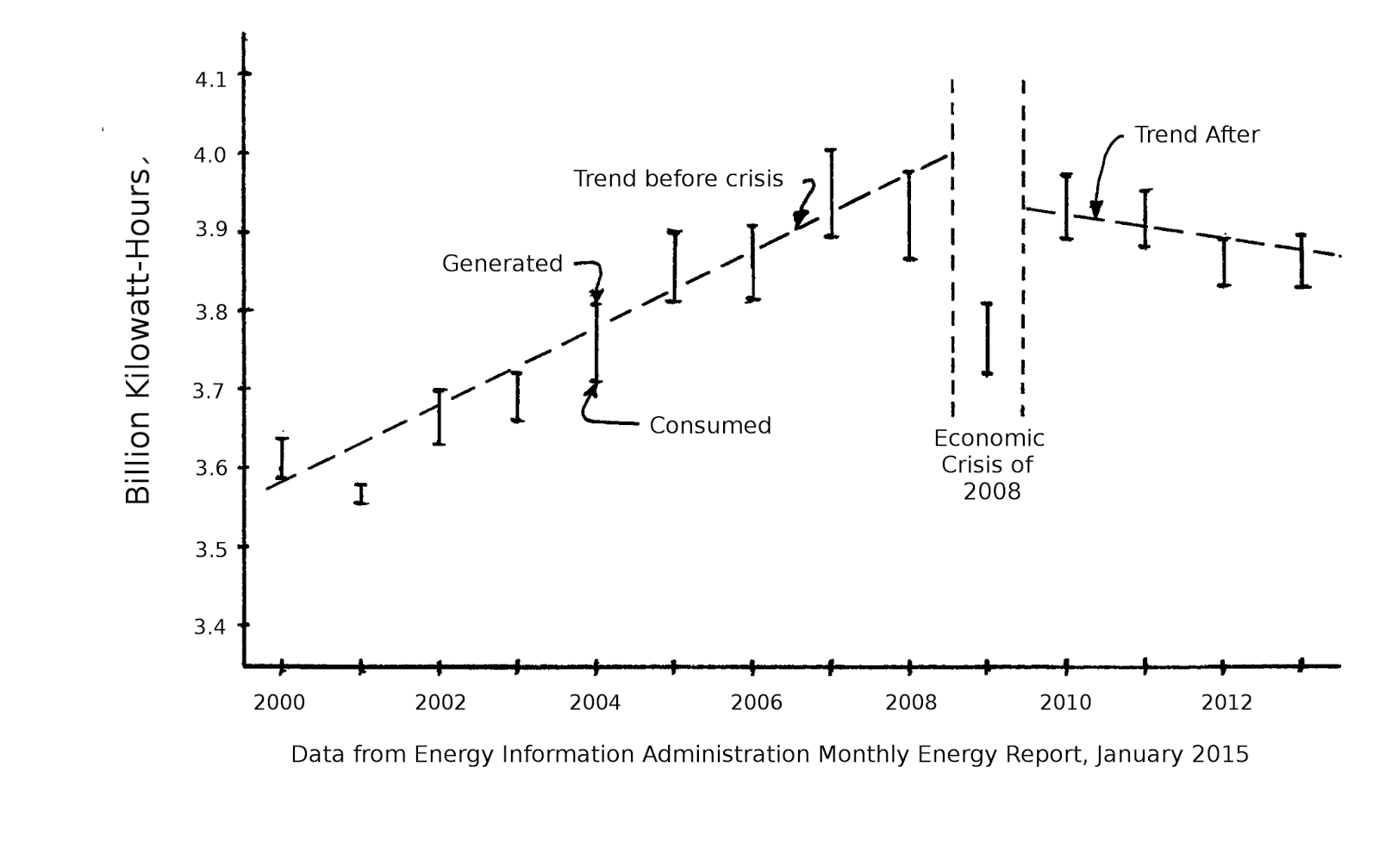 At a utilization factor of 90% (meaning it would run at full output 90% of the time), Fermi 3 would have an annual output of about 12,000 Million KW-hr. Recall that actual demand for 2013 was already 19,000 Million KW-hr less than the projected demand , and that discrepancy is likely to be much larger by 2025.

It is clear that the capacity of Fermi 3 is not - repeat, not - actually needed to meet foreseeable electrical demand in Michigan. Regardless, DTE Energy will soon be applying to the MPSC for a "Certificate of Need" for Fermi 3.

If this Certificate of Need is granted, then DTE Energy will be able to significantly raise the rates for electricity for everyone in the DTE service area. They will then be allowed to charge for "Construction Work in Progress" for as long as it might take to build the un-needed Fermi 3 reactor. This increase is expected to amount to $5,000 - $10,000 per household in the next ten years, and more if construction takes longer.

Even with safety considerations put completely aside, there is no need - as DTE Energy and the MPSC defined need - to build Fermi 3. At the very least, the MPSC should deny a Certificate of Need until it comes up with a new and more realistic plan for Michigan's 21st Century electricity. The best case would be if DTE Energy never gets a Certificate of Need for Fermi 3.

[Permission is hereby granted to anyone to republish this open letter, so long as it is republished in its entirety, including this notice, and the source is credited.]

Art Myatt
Posted by Halt Fermi at 6:48 AM